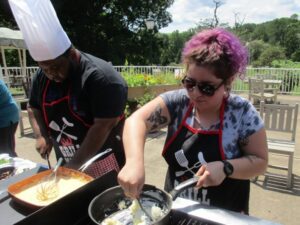 Morris View held its Second Annual “Chopped Competition” this summer. There were 4 Competing Teams cooking outside on the grill.
The “Administration Team” were the champions last year. Can they hold their title?

In the August 1 opening round of Morris View CHOPPED cooking competition, there were 4 teams who were pumped and ready to show their culinary skills in creating the best tasting appetizer! The cooking teams included staff members from administration, nursing, social services, security and dietary. The ingredients were presented to each team as the clock began the half hour cooking event.
After some serious taste testing by our judges, the team to get CHOPPED was Administration. Results were based on taste, texture and presentation, and it was a difficult decision for our judges. Good luck to Thanita and Cheryl, Alyssa and Khiry, and Friday and Terrel!!!

On Thursday, August 8th, our Morris View culinary teams brought their all to the second round of CHOPPED! Their challenge was to prepare the best main entrée using 4 main ingredients of chicken, cheese, cauliflower and sunflower seeds. Extra available ingredients were peppers, garlic, hot sauce, lemon juice, sour cream and spices of their choosing. It was another very difficult decision for our judges, but after serious taste testing the results were in: Team Thanita and Cheryl got CHOPPED! Everyone did a fantastic job and the two teams left to compete are: Team Alyssa and Khiry and Team Friday and Terrel! Congratulations!

And the Winners of the CHOPPED Competition 2019 are… TEAM FRIDAY AND TERREL!!!! Congratulations for a culinary job well done! In the heat of a sunny summer day, Team Alyssa and Marcia went up against Team Friday and Terrel in the dessert (and final) round. Teams were provided with fresh peaches, kiwi, graham crackers, pizza crust, coconut, bananas and assorted sugar and spices to create a savory sweet dessert dish. The judges were hard pressed to pick a winner as both desserts were so delicious. The winners won $100.00 to split between them and were given the honor of being the CHOPPED Top Chefs of 2019 at Morris View. Job well done by all contestants!!