Tying The Knot At Morris View: A Mock Wedding Celebration 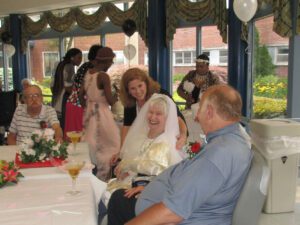 During a “reminiscing” session at Morris View one day in early June, there was a casual discussion about residents’ past life experiences. The topic of marriage came up, as most in the room had been married, and they were sharing their stories. One resident, Joan, spoke up and said she had never been married but had always dreamed of what it would be like to be a bride and have a wedding… That moment resonated with her Recreation Therapist, Daria Cohen, who shared the information with her co-worker Marcay Persaud who responded with the suggestion that we throw a “mock wedding” for Joan. The idea was proposed to the Recreation Team and the planning for the big day took off like wildfire. And so the date was set for June 28, 2018!

Soon after, the “groom”, Frank, was identified from another unit as he heard from Marcay about what was being planned for his friend Joan, and he was willing to partake in the fun. Joan immediately began her wedding planning by asking two of her best friends to be in the wedding. Patricia was honored to say yes to be her Maid of Honor and Maggi was happy to agree to be her bridesmaid. Frank asked 2 of his best friends to be in his side of the wedding party; Donald was named Best Man and Kevin was to round out the wedding party as Maggi’s partner. The question arose as to “Who would be giving Joan away to her ‘new husband’?” After some consideration, Joan asked her good friend Jack, who has been known to be a sort of “no-nonsense” kind of guy. But, seeing what it meant to his friend Joan when she sincerely asked him, he agreed to take her down the aisle. Jack stipulated adamantly that he would do it “only if he could wear a bow tie”.

Excitement was building and the plans were growing bigger by the day.

The wedding shower date was set and held soon after on 6/13/18. At the wedding shower, the women played numerous “shower games”, gave Joan shower gifts, and enjoyed refreshments as they celebrated their friend’s upcoming “nuptials”. Rose won the competition for “best toilet paper wedding gown” and Joan was made to wear the traditional “bow hat” that makes every bride-to-be, including Joan, blush! On 6/25/18, the girls got together again to throw Joan a Bachelorette Party! They made floral arrangements for the wedding reception tables. They chatted about what outfits they were going to wear to the wedding, shared in appetizers and sweets, and then toasted the bride-to-be one last time before “the big day”. On 6/27/18, a Bachelor Party was held for Frank. The groom-to-be and his buddies “shot the breeze”, had shrimp cocktails and NA brews to celebrate Frank’s last days of “bachelorhood”!

Finally, June 28 the day of the wedding arrived and the wedding buzz was all over Morris View. Staff and residents dressed in their “Sunday best” for the occasion. The glass-enclosed Atrium was decorated with white lights, roman arbor columns, and beautiful flowers everywhere. Rose petals embellished the white linen tablecloths. Elegant signs were posted at either end proclaiming: “Joan and Frank’s Wedding Day!”. As the Atrium filled with residents and staff, the wedding music played. First in the procession was Maggi, Joan’s bridesmaid, followed by Patricia, the Maid of Honor. And finally, the beautiful bride-to-be, Joan, began her way down the corridor aisle along with her friend Jack, who was holding her hand as they went. Jack “gave Joan away” to Frank and the wedding ceremony began. (It should be noted that there were not many dry eyes in the house!)

Daria Cohen, the “wedding minister” received the bride and groom and lifted the veil to reveal Joan’s beautiful, smiling face. Daria welcomed all in attendance (full house!) to the sacred marriage of Joan and Frank. She asked that all join in extending best wishes to the happy couple for the “one hour that they promised to have and to hold”. Sprinkled with humor, the wedding ceremony included the exchange of vows, an exchange of wedding rings, and a kiss (on the hand) as they were “now pronounce man and wife”. Joan threw her bouquet and Frank threw the garter-a huge cheer and round of applause erupted from the crowd!

The reception immediately ensued. It began with the newlyweds’ friend, Jane, singing “It Had to Be You”. The Best Man, Donald, gave the official wedding toast, followed by congratulations from everyone in the wedding party over the microphone. The bride and groom proceeded to cut the wedding cake (baked and decorated by Recreation Director, Karen Hogan). The newlyweds fed each other cake to a singing audience (“The Bride Cuts the Cake…”) and then the reception party music started. The guests were treated to stemmed glasses full of “champagne” and all enjoyed a piece of the delicious wedding cake. The reception was elegant and fun. Joel Werzberger, Assistant Administrator came to wish the happy couple all best wishes on their “wedding day”. And as tradition goes, Jack (who caught the garter) sat with Cheryl (who caught the bouquet) and put the garter on her leg to the cheers and applause of the crowd. Cheryl may just be the next bride at Morris View, as she too was never married!

Postscript: This event exemplifies the kind of intuition and caring response that Recreation Staff at Morris View provides to residents every day. Activities are created to meet the residents’ physical and emotional needs. In this case, a woman who dreamed of being a bride someday was able to realize her dream through the dedication and concerted efforts, primarily provided by her Recreation Therapist, Daria Cohen. As the excitement grew and the “wedding day” got closer, more and more people (staff and residents) became very excited, got involved and actively participated. The Recreation Team strives to make a difference in every resident’s life, giving them joy, happiness and a sense of importance. It’s “the stuff that life is made of”- something to look forward to, something to work toward together, and in the end, something to celebrate with family- the family that lives and works at Morris View Healthcare Center.